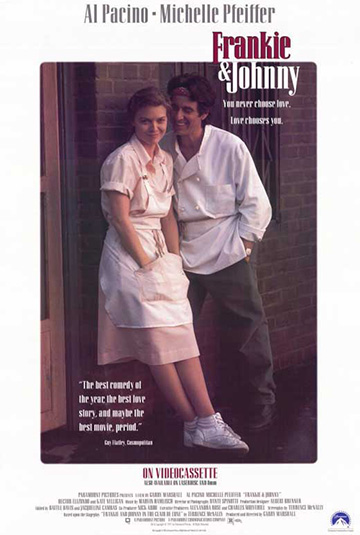 Of course we all love Scarface. The on screen duo of Al Pacino and Michelle Pfeiffer was great in the Brian de Palma. With more time on my hand to watch film because of the pandemic, I decided to check out another film with this on screen pairing. One by Garry Marshall right after he graced us with the excellence of Pretty Women. Frankie and Johnny is honestly a powerhouse. The charm of the Pacino and Pfeiffer is what keeps you entertained from the very first minute.

The film is about a man who recently is released from prison. He served time for forging a check and now needs a job to make ends meet. So he finds a job at a diner as a cook. While there he immediately falls for a waitress. His attempt to win her over proves difficult as shes dismissive of his interest and intentions and has inner conflicts of her own. Yes, the film makes a few references to the song with the same name, if anyone was wondering. The film also has a backdrop of 90’s New York City, which I always appreciate.

My first thought about halfway through was why Al Pacino didn’t do more romantic films. He’s honestly fantastic in this. His character is charming even though he is desperate in his quest to win the heart of someone who is disinterested in him. Michelle Pfeiffer is great as a woman with a tough exterior and complex emotions and feelings towards her own life and Frankie. The duo may not seem like a good fit for such a common people role and they weren’t the first choice but their chemistry is great even when they are battling each other. Also, this film handles the LGBT characters and themes quite well, especially for a film of its time.

Marshall may not have always brought the quality in film but I loved the writing and aura of this one. The film is so simple yet works because of the strength of the performances of its leads. On the heels of Pretty Woman he brings an almost equally fine piece of work. I had not even heard of this film before watching it but I’m glad I did. Very rewatchable and I just wish this was out on Bluray so I could add it to the collection.