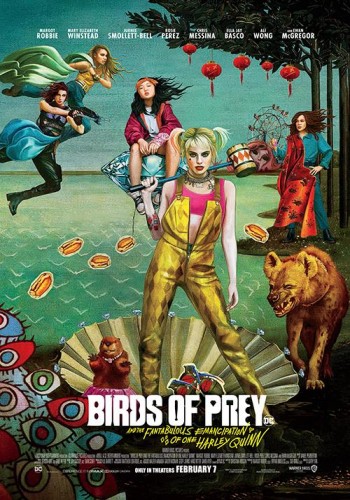 Lets face it, the DC Extended Universe has been a mess for the most part. Apart from Wonder Woman, most of the rest has been a misfire. None a big offender than Suicide Squad. That film was awful all around and was just a disaster that no one wants to talk about. I wasn’t a fan of Robbie’s Harley Quinn in that film so much but she’s grown on me over the years as a performer ever since I, Tonya. Birds of Prey is certainly an improvement over Suicide Squad and a better entry for DCEU although its not as good as can be.

The film follows the life of one Harley Quinn. She has broken up with the Joker and seeks a new thrill. She somehow gets involved in trying to recover an expensive diamond for an erratic night club owner Roman Sionis. Along the win Harley butts heads with other woman who all are out to seek justice and break chains that keep them restrained. The film stars Margot Robbie, Ewan McGregor, Rosie Perez, and Mary Elizabeth Winstead.

The film is visually an improvement over Suicide Squad. Its brighter and fun, not as dark and gloomy as Suicide Squad. The action sequences are actually quite good, primarily the last fight in the funhouse. Robbie embodies the character better in this film and doesn’t have many cringe induced dialogue like in the previous film. I liked Winstead’s character Huntress and the humor attached with her name. The film has narative flaws with it being narrated by Quinn and going back and forth I found this to be a weak and overdone way to do things.

There are passages in the film which are pretty boring, basically as it sets up for the final get together. McGregor chews scenery the whole time he is on screen. Overall, DCEU is still a disappointment for the most part but there are moments here and there worth talking about. This film is very on the nose about its women characters and how they are badass working together. While Birds of Prey isn’t anything amazing or remarkable its easily one of the better entries in this universe. If this film makes banks, I’m sure the studio will plan a sequel.