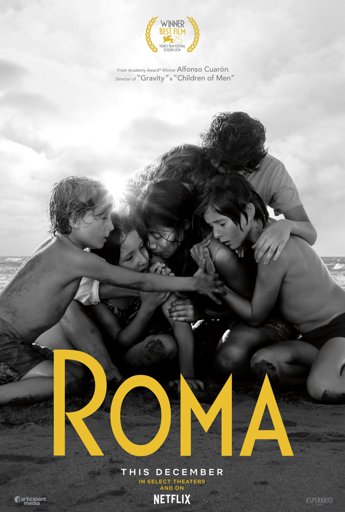 I know this is coming to Netflix in a  few weeks but the rave I’ve heard about it and being that this is Alfonso Cuaron’s next project, I had to make sure to see it on the big screen. I loved Cuaron’s last film. Gravity for me was a fantastic visual experience, as well as a emotionally gripping experience. Cuaron’s handiwork behind the camera was on full display with that film. Here he comes with a Spanish spoken, black and white, Mexican film that is semi biographical. This film is fairly amazing, from start to finish. I think it excels its expectations and goes to show that Cuaron is one of the best directors on the scene.

The film takes place in Mexico City in the early 70s, and is about a Mexican housemaid who takes care of a family of four children, along with their parents and maternal mother. The film shows her routines as the housemaid, her trials and tribulations at work and love, and ow her life changes when she becomes pregnant. The film stars a relatively unknown cast but has a primarily fantastic performance by Yalitza Aparicio as Cleo, the housemaid.

From the opening scene of water washing tiles with the credits overlaying, you know you are in for an immense experience. Cuaron utilizes cameras set in place and slow pans to encompass the entire scope of the visual experience of the household and the daily tasks of Cleo. It seems routine at first but the build up throughout is an experience that keeps you watching every second. Cuaron has to be a contender for Best Director at the Academy Awards again as the camera work, cinematography, and sound effects are extremely vivid. Especially, the scenes with the wives in the films climax, lord.

The film becomes an emotional experience as the film builds along. You can’t help but have strong responses as we see what our protagonist must deal with. The film is set in a time with political unrest and that backdrop adds to the chaos of what occurs in Cleo’s life. The film is full of themes and symbolism that could be analyzed in greater detail in a separate entry. There is just a lot that goes on in each sequence of the film. I think Gravity is my personal favorite, but Cuaron’s best film has arrived, and I think we have a clear favorite this year. Watch Roma on the big screen if you can, its a cinematic experience tailored with passion by Alfonso Cuaron.