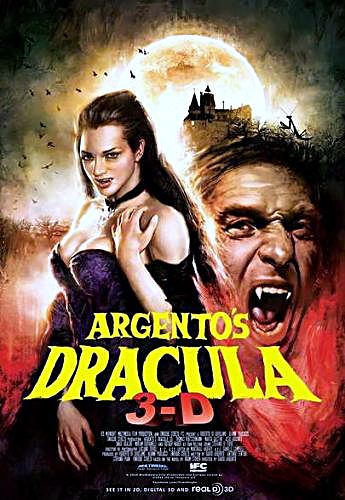 If someone was interested in checking out the work of Dario Argento and they started with Dracula 3D, they probably would never come back to check out the rest of his filmography. I’m no Argento expert. However, I have seen Suspiria and Phenomena and think both are absolutely excellent. I especially love Phenomena. Argento is a master at making his films pop with colors and lights. His brand of horror also portrays beautiful cinematography amidst gruesome scenes. The BLOOD usually looks excellent. Naturally, I wanted to check Dracula 3D out. It just seemed like a good cheesefest; a film that looked like it would be “so bad that its actually good.”

I’m quite disappointed to say that I was wrong. This film is not very fun at all. I like the way the film looks. The images and scenes look crystal clear, colorful, and lively. Its all that I would expect from Argento, very indicative of his craft. From there I really struggle to find any other positives. Okay maybe one more, there are beautiful girls on display. This had the feel of a B rate film that offers a few scenes of erotic nature and this did not disappoint in that department. Okay, now I’m certain that that is where the positives of the film ends.

The effects good lord, they look like something you would see in a SyFy channel movie, maybe even worse. I don’t know if its from the 3d conversion but it looks like the worst type of B movie effects. Normally I wouldn’t mind that, but it was distractedly bad. Just pay attention to the scenes where a vampire turns into dust, it looks ridiculous. The dialogue and general acting is the next thing here. it goes from over the top and hammy to uninterested characters just reading lines. All kinds of scenery chewing present from the actors (most of who I have not heard of apart from Asia Argento).

The above negatives may sound good to someone who would think “this movie sounds like its bad but in a way where you can find cheesy enjoyment out of it.” That is not true. The plot is another retelling of the story of Dracula, which is fine because Bram Stoker’s Dracula is a great story and I welcome different interpretations of the tale. This variation is mind-numbing  and incredibly dull. You get no enjoyment in what happens and just pray for the end of the torture. I need to see more of Argento’s later work to make a full assessment but its likely the magic of his earlier films is completely gone. I don’t think I’ll even bother with the later work and check out the stuff from his glory days because I’m sure its exceptional.